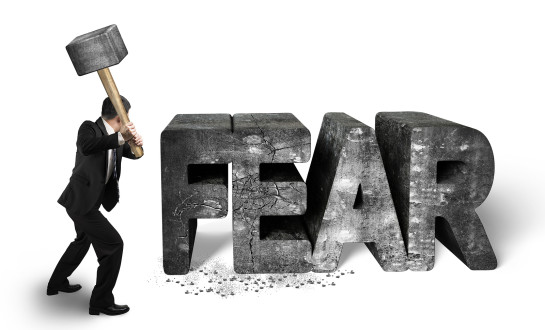 Working as a Sydney life coach, one of the things I help people do every day is overcome fear. Fear of rejection, fear of public speaking, fear of failure. You name it, someone, somewhere, will fear it. Using Neuro-Linguistic Programming techniques is one of the most powerful ways to overcome fear, and the good news is, it usually takes minutes, not hours or days!

Some of the NLP techniques we use include timeline therapy, EFT, and Fast Phobia model. Let’s look at some of the most successful people on the planet, and the fears they overcame. If they can do it, you can too!

The list of world leaders who overcame their fear of public speaking and went on to deliver their world-changing messages is a long, and surprising one. Gandhi, Thomas Jefferson, Abraham Lincoln, Winston Churchill, the list goes on…

Warren Buffett, who has amassed a fortune in excess of $65 billion US dollars, was so terrified of public speaking that in college he specifically chose courses that had no public speaking component. However, when he became a stockbroker at the age of 21, he knew he had to choose between overcoming his fear and achieving his goals or letting the fear win and settling for a life of mediocrity.

Buffett committed to overcoming his fear, and faced his challenge head on. He enrolled in a Dale Carnegie public speaking course, made it through, and has gone on to be a world leader in business.

What is the one thing all these leaders had in common?

They had a vision, and they had a purpose that they had to complete to make the world a better place. Their vision was so much bigger than their fears, that they were prepared to do whatever it took to realise their dream.

So many people have a fear of rejection that they have (often) carried with them since childhood. It’s heartbreaking, because the fear of being rejected stops people from living their life, achieving their goals, and making a contribution.

In our formative years, between the ages of 0 to 7, we haven’t yet developed what is known as the ‘critical factor’. The critical factor is what helps us filter and rationalise information. For example, between the ages of 0 to 7, if you hear someone say ‘you’re not good enough’, this could be absorbed into the unconscious mind and taken on as a limiting decision around not being good enough, when the person who said it wasn’t even talking to you!

Colonel Sanders was rejected 1009 times when, at the age of 65, he set off across America to find a company who would sell his fried chicken on a bigger scale than just his stall at a petrol station. He finally received a ‘yes’ in Utah and founded Kentucky Fried Chicken. KFC now has over 18,000 outlets across the globe.

You see the Colonel, and other celebrities, leaders, and entrepreneurs, all deeply and completely accepted themselves, and believed in both themselves and their product. When you believe in yourself unconditionally, a rejection is just a minor setback on your path to glory.

Like the fear of rejection, so many budding entrepreneurs have a fear of failure that keeps them stuck. Fear of what people will think, fear of losing their car, fear of letting down the people who rely on them. As an entrepreneur, when you remove the exits and have no Plan B, you force yourself to tackle your fear of failure head on, you go through a process called perturbation.

Perturbation is literally the state of being perturbed. There is a disturbance to your normal way of doing things that is produced by an outside force. As a coach, I am that force! This is why when someone comes to me for coaching, I set them a challenge or an ordeal. For someone launching a business, I will have them put their savings into a term deposit so they have to go out and get sales. They feel perturbed.

I love the old Japanese proverb that says: “Fall seven times and stand up eight”. Never was this truer than for Walt Disney. He, of all people, was fired by an editor due to a lack of imagination and ideas! He then launched his own animation company, which went bankrupt, and he was initially unable to get finance for Disneyworld. Today, the Walt Disney Company generates $30 billion US dollars in revenue per year, employs thousands of people, and pit millions of smiles on faces. If Walt Disney had a fear of failure, he would have given up at the first hurdle!

If you’re tired of letting fear rule your life, stopping you from achieving your goals, join us at Live it Now and let’s develop unshakeable confidence together.