6 Steps To Get What You Want 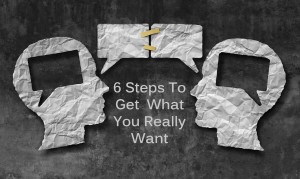 Do you remember being a child and wanting a chocolate bar, new toy, or to stay up late?

How did you go about making sure you got what you wanted? Pleading? Maybe a tantrum?

While that works for children, we can’t do that as adults.  All’s not lost though, because there are techniques that anyone can learn to get what they want.

Have you ever met someone new, had a conversation with them, and felt warm and tingly? That’s rapport 🙂

Here are the 6 Major Elements of Rapport


If there’s anything you want to get, or if there’s anything you need, then you will probably need someone’s help in getting it! This is true whether you’re a salesperson, a teacher, or even a carpenter. No matter what you do, the ability to develop and maintain rapport with large numbers of people of varying backgrounds will allow you to get what you want. Having rapport with someone will allow you to do anything. Rapport is probably the most important skill on the planet!

Element One: Match the modality the person is in


If you’re meeting with someone, for example, who is in high visual, and you’re not quite there, sit up in your chair, breathe from the top of your lungs, and be excited. Or at least act in a way that matches what they’re doing. On the other hand, if you’re meeting with someone who is auditory, you want to slow down a bit, modulate your voice more, and waaay dooown. And talk to them about feelings. Actually change your voice tone so that it matches theirs, and really “get a sense of it”.

Actually physically copying their posture, facial expressions, hand gestures and movements, and their eye blinking will cause their body to say unconsciously to their mind, “Hey. (s)he likes me!” It’s undeniable to the nervous system. People who have learnt this process in Excellence Now often say it feels like you’re dancing with a new friend.

Match the other person’s tone, tempo, timbre (quality of the voice), and the volume. You can also match their keywords. Perhaps they often say, “Actually.” You can use it in a sentence several times. Say it back to them.

Element Five: Match the size of the pieces of information.

We call this ‘chunking up’ to the big picture, or ‘chunking down’ to the finer details.

If someone usually deals in the big picture, they will probably be bored with the details. On the other hand someone who is into details will find that there’s not enough information to deal with, if you only give them the big picture. So make sure that you are matching the content chunks that the person deals with.

This is what’s usually called rapport. When people first meet, often their early relationship is about matching common experiences, common interests, background, and beliefs and values and their ideologies and common associations. Ask them questions about themselves until you find something you have in common.

Those are the critical elements of rapport.

So how do you establish rapport, and how do you know when you’re in rapport?

To establish rapport, the process is to match and mirror completely, what the other person is doing. When I’m training people in rapport skills they often ask, “Well how can I do that, they’ll think I’m making fun of them.”

You do need to be subtle when doing matching and mirroring, but typically most people are in a trance when talking anyway. They’re so caught up in what they’re going to say next that they are rarely fully aware of what you’re doing. And if they do, you can have a good laugh about it ☺

Rapport is so important in all areas of life, that we teach it and practice it in all of our courses. If you would like to become a master of rapport and getting what you want, then you will want to consider registering for Excellence Now, our NLP Practitioner training. Those who are or want to become coaches and consultants will also want to attend Coach Now, where we teach you how to build rapport with potential clients as well as strengthening rapport to help your clients achieve bigger results.